Mankind and the civilizations that flourished in the world, starting roughly twelve thousand years ago, have been the driving force of change on planet Earth. Interestingly, the same species who first came from the savannas of South Africa that would erect buildings to serve as temples to worship long-forgotten gods, would also - quite unwittingly, change the landscape of the world.

Some would argue that man's hubris is based on nothing but vile greed. Others perceive it as a strong urge to move forward and join the unending march of time. Mankind will build monuments, towers, and systems that defy even the gods they once worshipped.

You have to ask, however, that for the better part of over a thousand years - was it really mankind who drove the tides of destiny? Was it really us who built these architectural and technological marvels, or were our hands forced - terrifyingly and unknowingly?

Is it really mankind that push the world’s direction or is it something else?

This blog article, which is quite timely I might add, is about the most deadly and virulent killer that kept on resurfacing throughout history and so I'll be separating this into a few articles instead of condensing it into one long passage.

I'm a big fan of music - especially the classical kind. I would listen to Wolfgang Amadeus Mozart over and over again. He made a composition entitled Il Requiem before he succumbed to an unknown disease. This composition was meant to be performed during catholic mass proceedings meant to preside for the repose of souls of the dead.

This is quite appropriate for this article. This is dedicated in honor of the lives lost then and now.

In this theater of literary art where my pen is the conductor's baton and my words make up a harmony played by the orchestra that is my mind, the Concert of Death has begun.

Act 1: Bane of The Byzantine Emperor

Ancient Rome: In the year 753 BCE, a small principality in what is now the country of Italy would emerge victor against a handful of others over land and resources. This principality

would eventually call itself the Kingdom of Rome.

Over the span of one thousand two hundred and twenty-nine years, this small kingdom would take more land and conquer more peoples. It would assimilate more and more into its empire until it covers the entire peripheral bank of the Mediterranean Sea and miles upon miles of land inwards to the surrounding continents. It will eventually call itself an Empire.

Meanwhile, a battle was brewing in the northeastern Eurasian steppes covering the north of Central Asia. The Xiongnu nomads, who would sire the Hun Dynasty in China, were slowly dying off in the hundreds. They were coughing up blood and pus nonstop. The disease would eventually kill 50% of their people's population before vanishing as quickly as it came.

But it did not really go away - it simply moved west, past the steppes of Central Asia and, through the land trade routes, through Egypt then to Ancient Rome.

Let's pause that for a moment and look to the South at the banks of the Nile River.

541 AD: A young man in his late 20s, living and working in Pelusium carries a bag of grain to a ship. Passing by a large rat, dying on the curb of the port near the stern of the ship. He notices the rat but gives no mind.  The young man would climb up the ship and place his bag of wheat in a crate inside where there appears to be a pack of rats scurrying about in the damp and dark cells of the cargo hold. This ship, now full to the brim with trade goods from Egypt would travel north, toward Constantinople, the capital of the Byzantine Empire - the largest city in the world at the time.

Upon arriving at Constantinople, the sailors and merchants would dock their ship at the harbor and unload their goods onto the ports where men and women of old will assess the value of their wares.

Unfortunately for the same men and women, it's not just wares that these merchants have brought, but also The Plague.

The rats that brought this disease with them that were still alive, scurried out and about from the ship carrying with them the fleas which were the vectors of the infection. The fleas would then leave their dying host and look for a warmer and suitable meal: men. Upon latching on to a person, the fleas would bite thereby injecting their new host some blood from dying rat thus infecting them with this plague.

This virulent disease would go on to wipe off around 40% of the city’s population - even infecting the emperor, Justinian the 1st, who would luckily live through it. The violent grasp of what would be known as Justinian's plague on the, then struggling, Byzantine empire would ruin the empire's economy over the following decades effectively starting its decline. With fewer people to work on farms as most of the populace died off due to the plague, there were simply not enough people to pay taxes. Consequently, the empire could no longer afford to pay for the campaigns it was waging against other neighboring empires. 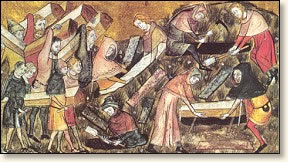 We've discussed the beginnings of trade and the methods of which this deadly blight has used to transfer from one host to another. This dark period in history would be one of the first instances of mankind's greater connectedness.  With this, the stage is set and the players are ready. The notes are beginning to make one's heart pump with excitement. You can feel it in your head and your chest.  The Concierto is on its way to a crescendo.

This is Rhiz Manalo, Managing Consultant and Co-Partner of CentrAsia Tours, Co-Founder of The White Dog Collective signing off.

You can also catch me on my personal portfolio

Knives in the Night Part 3: The Legacy of the Secret Order of Assassins

Knives in the Night Part 2: The History of the Secret Order of Assassins

Knives in the Night Part 1: The Origin of the Secret Order of Assassins

Want to choose where you want to go and when?

PLOT YOUR OWN JOURNEY